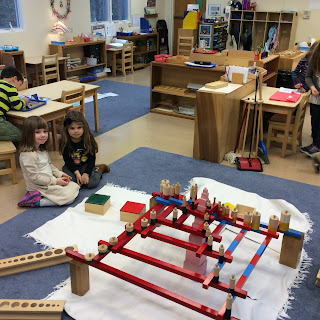 If you have ever tried to learn a new language as an adult, you will quickly experience what neurological research has borne out: “The ability to learn a second language is highest between birth and the age of six, then undergoes a steady and inexorable decline. Many adults still manage to learn new languages, but usually only after great struggle.”[i]

The child, on the other hand, moves through this “acquisition” of new things (language only being one of them) rather seamlessly and joyously.  Today’s brain research corroborates what Dr. Montessori intuited from her own observational research more than 100 years ago:
“…in the first few years of childhood there are a number of critical or sensitive periods, or “windows”, when the brain demands certain types of input in order to create or stabilize certain long-lasting structures.
…Rich experiences, in other words, really do produce rich brains.” [ii]

Montessori advocated for the importance of taking full advantage of the “absorbent mind” during the period in the child’s development when the mind is most receptive—during what she called “sensitive periods”. This time from birth to 6 years old represents a period of rapid growth in man’s intelligence.
It’s a time when the child is particularly sensitive to stimuli that promote the development of a certain skill. In a Montessori classroom, stimuli comes in a variety of forms, where the materials and the whole educational methodology are designed to provide a very rich, multi-sensory, hands-on approach to learning.
The melodious, quiet  “hum” of a perfectly active Montessori classroom speaks volumes of the power of letting children “do”, “absorb”, “create”, and “develop”. They do this through the focus that comes from the activity, repetition and the freedom to persevere. And from within the child, this “explosion of learning”—the sudden outward manifestation of a long process of internal growth—as Montessori called it, does ensue.
i:FERTILE MINDS By J. MADELEINE NASH Sunday, June 24, 2001
http://content.time.com/time/magazine/article/0,9171,137214,00.html
ii: IBID

Unplugging - Taking the Challenge One Step at a Time