When you’re five years old, the prospect of speaking to one adult, let alone a whole room of them, can be quite daunting. Providing children with the confidence to do so, however, is a skill that will provide the child with social skills that will serve him or her well for years.

At Westmont, we incorporate public speaking early and often, to build up to a kindergarten play in their final year with us. Children first learn to speak in front of their class during show-and-tell in their Early Childhood class. Then in kindergarten, they are given the opportunities to share projects they have created and read books to their class. We even have a small stage in the room so they can gain confidence as the center of attention. They also put together and perform a play, first for the children of the school, and then for the families of the school. To get the Early Childhood children ready for this big step we invite the EC children to sing along at the play as chorus members, sitting in chairs in front of the stage to ease them into this type of production and make them more comfortable with the concept when their performance day as a kindergartener arrives.

Instilling children with the confidence to stand on a stage and speak publicly is a skill that we hope children take with them when they leave Westmont. We want each child to believe they have something to contribute to the world and that their voice matters. 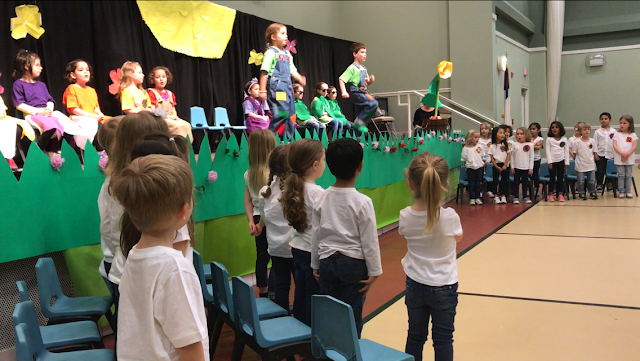